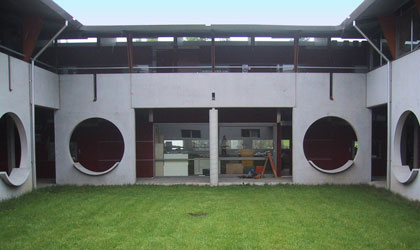 I’ll lay my cards on the table right from the start: I think this is a terrific building. It combines beguiling and expressive structure with a relaxed mix of materials, poetic form-making and a beautiful court space — and all with an admirably effortless and straightforward delivery.

While you will have to visit to really appreciate most of this, the part of this recipe that will be most obvious in the photos here is the way the concrete structure is put together. Ever since someone told us on the first day of architecture school that there is an “honest” way to construct buildings — the architectural Holy Grail of tectonic, what-you-see-is-what-you-get, monolithic methods of architectural construction — we have been continually indoctrinated to believe that monolithic construction methods are good, while layered construction methods are inferior.

But as Edward Ford points out in The Details of Modern Architecture there are good reasons for building in a more layered manner in these times, primarily that the skill levels, small tolerances and expensive materials required for finishing work need only form the outermost layer and so cover a multitude of earlier sins. This construction-by-layers is the reality of building in New Zealand, as it is in the rest of the world, so it is pleasing occasionally to see work where expressive structure is brought to the fore. David Mitchell says his practice came up against some contemporary construction issues on this building, and the finishing on the pre-cast work made for some tense site visits for the project architect Ginny Pedlow. But with the robust nature of the structure and a little judicious patching it was all well worth it in the end.

Mitchell says that early in the project a couple of factors influenced the choice of bare concrete panels for the primary structure and finish of the new building. With landscapers as clients it was only natural to try for a strong integration of architecture and landscape (more about this later). So the design included a ‘plant wall’, the courtyard garden with pools, as well as some areas where vines would be encouraged to grow up exterior wall faces. Concrete, of course, is one of the few products that can hold its own against the destructive tendencies of virginia creeper.

Mitchell also recalled an observation he had made in the course of an earlier courtyard building — the Auckland University School of Music — that an architect may work hard to achieve a special gradated paint finish that proceeds through shades of a colour from one end of a long wall to the other, only to be stymied by the next generation of facilities managers who three years later paint the whole thing Institutional Light Green. So the decision was made to go for bare concrete and a finish that was unfinished and that, with a bit of luck (and the cost of paint), would stay that way. 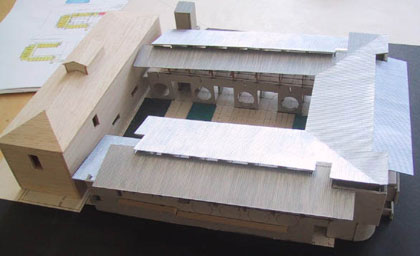 Mitchell Stout Architects initially went through a masterplanning exercise with Unitec for the expansion of the Landscape School and this settled on a long-term strategy that included new staff and student common rooms opening onto a linking court, new staff offices, and a series of new studio spaces. Mitchell says previously the School consisted of disconnected components — from landscape designers, to plant scientists, to floral arrangers — all spread around different buildings. It was decided that the shed forms that already existed were better for the ‘big’ functions; therefore offices were to be built first, to gather staff into a single coherent environment. This took the form of a two-level courtyard building with circulation within external arcades and verandahs.

The architects had seen examples of a courtyard typology of a similar scale in Auckland and Italy (see sidebar) which they felt lent themselves to this project. Mitchell describes the courtyard form of the building as a reaction against the predominant typology in the Mt Albert campus of “buildings standing in paddocks”, and the predominant Auckland response of looking outward. While there is no doubt there is a sense upon visiting the Landscape School of an inward focus from the circulation and communal spaces (a resource room and staff lunch room), in fact two wings of the building have their main office windows looking out to the east and north. A couple of the inhabitants of the building told me they enjoyed this duality; they have available an expansive aspect over the campus as they work at their desks, and a collegiality when they step out of their offices into the inner communal areas.

Another connection between offices and the circulation zones is via the small, low-set window next to each of the office doors. The positioning of this window is ingenious. It is placed at sitting height, meaning that people moving along the arcades are not able to see directly into the offices without bending over. The seated occupants of the offices, however, retain their connection with the courtyard (and, explained one staff-member, become expert at identifying colleagues from just their torsos). This window also becomes a frame for the self-expression of the occupants (contents include succulents, cacti, succulents, motocross posters, stones, bones, pottery, and more succulents), and it possibly serves as a more useful signage marker than the room number engraved above their doors. 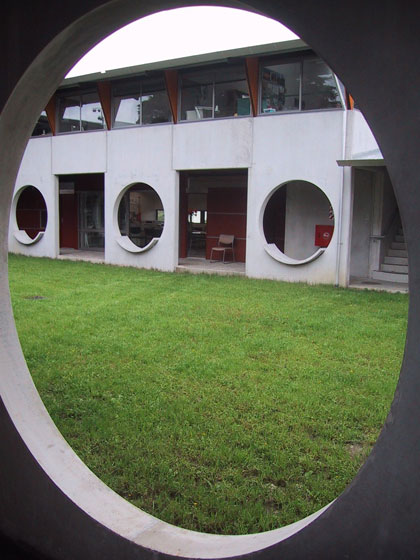 By far the most striking visual elements are the concrete panels that form the lower arcade. In the courtyard elevations the designers have set up a marching rhythm of repeating elements with occasional syncopation or gaps in that rhythm when there is a practical need. Some concrete panels have circular cut-outs and into these have been placed separate curved sill elements that generously give the width needed for sitting or reclining. As well as the strong rhythm of the concrete panels there is a welcome harmony of material combinations: on the verandahs sections of warm orange stained plywood are used as connectors for simple black stained timber verandah posts and rafters upon which sit continuous galvanised SHS purlins. All of these elements are put together in a robust, unfussy way.

The verandah swaps to the exterior elevation on the most public west side thus softening that elevation with colour and setbacks, while the south and east exterior elevations are quite hard and grey. On the exterior of the building taller concrete corner elements provide a positive way to turn the corner while leaving the sloping roof elements disengaged as simple planes. These corners are to be covered in virginia creeper. Differentiation of the concrete panels has been emphasised by allow them to run past each other in large halved joints. In a similar fashion, projecting elements between windows serve several functions as sun shades, privacy screens between rooms and structural support.

So, the architecture of the building is well resolved but, like the cobbler’s children who have no shoes, the Landscape School seems to have had problems getting the arboreal side of the project under way. The creeper has yet to show up and begin its creeping and the central court which is to have water elements as well as planting and a central Jacaranda tree is currently fitted with a carpet of rye grass.

Louis Kahn said that intuition is the most exacting and reliable sense; it stems from the inspiration to live. The way this building has been put together has a lovely feeling of intuition well-controlled. Even though it is a truism that the courtyard form accentuates the internal focus of a building and adds to the collegiality of its inhabitants, it is the balance between inwardness and the openness of the aspect from the offices that is the strength of this particular building. The robustness and vigour of the architecture appears appropriate to the kind of robust characters you would expect to be part of a Landscape School and the way the open arcades bring staff closer to nature seems, well, natural.