Kenneth Frampton must be a very busy person. A quick search at Amazon throws up nearly 100 books that he has authored, edited or contributed to. They run the gamut from his classic Modern Architecture A Critical History (third edition and just about due for another), through New Directions in Modern Architecture, Modern Architecture and the Critical Present and the, no doubt extremely useful, Isms of Architecture (1982, audio cassette). There are also a number of monographs on architects Juhani Pallasma, Todao Ando, Alvaro Siza, Willian Turnball, Harry Seidler and others. 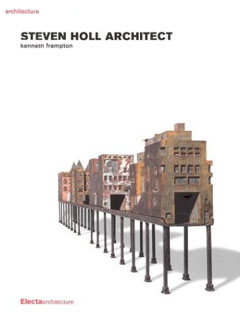 Steven Holl, Architect (2003 Electa) kicks off with a substantial introductory essay by Frampton that describes the evolution of Holl’s work over the last 25 years. The bulk of the book (335 out of a total of 415 pages) is made up of project descriptions divided up into subsections by project type: edge of a city, housing, institutions and houses. The appendices contain a chronology of (selected) works, biography and bibliography.

Holl (55) has been a professor at the Graduate School of Architecture and Planning, Columbia University since 1981 and was named Time magazine’s architect of the year in 2001. Well known for his watercolour sketchbooks that communicate projects in a loose artistic style, the book’s biography establishes Holl’s credentials and reinforces the image of the architect-as-artist by listing exhibitions of his paintings and noting that his drawings have been purchased by the Museum of Modern Art. The chronology of works opens in 1975 with a home for Myron and Helen Holl and 4th prize for a Manilla housing complex, which interestingly was the competition won by a bloke called Ian Athfield.

Holl’s earlier works have that Aldo Rossi/typological look notwithstanding that they already contained the seeds of his interest in materials and indirect natural light. He became better known in the eighties with some interior projects in which he developed these interests. The designs have evolved over the last 15 years to where, in works such as the St Ignatius Chapel, building forms no longer need to be generated or justified in other terms and become an extension of his experimentation with material and light, and come from a personal and phenomenological expression.

At its best Holl’s mastery of the creative process can result in a marvellous experimental looseness providing real architectural insight. If things don’t come off there can be a sense of arbitrariness and resolution can be patchy.

This intuitive/artistic creativity seems to give the best results when given free reign and the polemic or theoretically initiated architecture is left behind. The book’s written descriptions of the work can sometimes seem slightly self-conscious. Whereas the expressive language and references may have helped grease the creative cogs, they can also leave the reader feeling queasy when used to describe completed work.

This book is worthwhile as a record of how the work of an artistic and creative personality can develop over time, and certainly the lessons on how indirect natural light can be brought into buildings beautifully may be worth the purchase price alone.