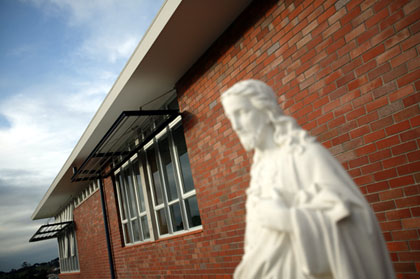 What type of learning environment would you design in order to foster creativity and promote achievement? Well, you might try low-key, red brick modernism if Sacred Heart College is anything to go by. With former pupils that include such musical luminaries as the Finns, Mike Chunn and Kiwi icon Dave Dobbyn, not to mention oval-ball heroes Sean Fitzpatrick and Xavier Rush, the school must be doing some things right.

The Catholic boys school that now caters for years 7 and up was originally established in 1903 in Ponsonby. In 1955 the Marist Brothers moved their charges eastward to a large site in Glen Innes, and that new beginning has resulted in the 100-year-old school having a surprisingly consistent set of mid-century, modernist, brick buildings.

One of the best of these original buildings was the first thing Patrick Clifford of Architectus saw when he initially visited the 55 acres of rolling greenness that is the college’s site. The original two-storey administration and reception building (Owen, McKenzie & Foote Architects 1955) sits near the main gates and has a simple modernist formula of brick walls and concrete detailing that is well-composed and unfussy. The crisp brick surfaces are carried in some places by interestingly shaped concrete columns, while on other elevations they extend down to a random rubble plinth. The wide eaves of the roof have thin edges and negatives that nicely separate them from the walls. All very polite and with little decoration apart from an elegant piece of cruciform branding over the entry.

At the other end of the campus the same architects designed the library and hostel in 1966, but in the intervening decade things had loosened up somewhat and decorative panels in both brick and plaster are used extensively. A regular rhythm of concrete fins and precast concrete canopies provide sun protection and modulate the facades. 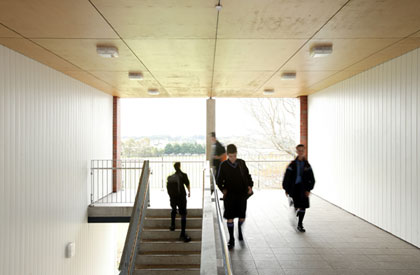 Architectus worked with project managers RCP and the school to develop a master plan and then to extend the school by adding three pieces of new work: a new Middle School; a new reception and administration building; and a new technology wing that extends an existing classroom block. The new work is generally located to the north of the campus with expansive views for all the classrooms and the new staffroom – an improvement especially appreciated by principal Philip Mahoney and his staff.

The obvious question of how the design of new work should relate to the existing buildings was, Clifford says, quite straightforward. “We tried to respond positively and were quite relaxed about taking the existing architectural idiom and using it within the new work. We resolved to add another layer to the school allowing it to grow as a continuum.” Clifford says that the existing language needed to be extended to meet contemporary life and teaching requirements. This is expressed as more openness, in a broad sense of the word.

Both Clifford and project architect Prue Fea conceive of the new buildings as contributing to the context and continuity of the school rather than creating something explicitly new. They describe the expansion of the school in simple terms as “long skinny buildings creating courtyards”.

The first of these has been named the “Centenary Courtyard”. Visitors to the reception cross through this well-formed exterior space defined by low stone walls, past a carefully placed statue of Christ and then up steps built from the same travertine as the original reception building. This raised entry court has a picturesque view over the grounds to the Hauraki Gulf and provides a ceremonial plaza for outdoor gatherings such as last year’s centenary celebrations. 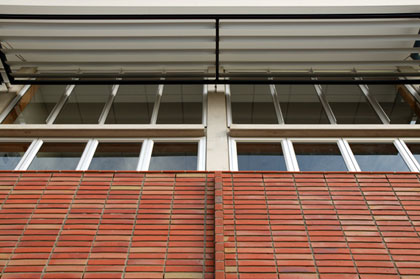 Inside the reception the increased openness sought by the architects manifests itself as high-level roof windows with scooped white ceilings that bring natural light into the deep plan. When discussing the project Clifford cites both Aalto and Rafael Moneo, and the mix of natural light, blonde ply and white curved ceilings in reception is reminiscent of there work. The scale of the reception area is quite intimate so the light scoops provide a vertical extension to the space, although air conditioning grilles appear to have been inserted as an afterthought into the most sensuous part of the whole composition. The creation of this top lit interior has led to visible boxes on the roof in a similar way to Moneo’s Stockholm museum. Architectus have chosen to cover the boxes and the rooftop plant in a single extended form that is clad in a natural timber grille. This modulates the light but the finish seems incongruous against the steel roof.

The new classrooms in Block C are designed as uncomplicated spaces with regard for the budget. The lower level rooms have striking ceilings of perforated ply panels between precast concrete tees. As observers of education architecture will know, the use of walls of sliding glass doors is currently de rigueur and at Sacred Heart most new classrooms have one such opening wall. Although it was a cold day for our visit it is appealing to imagine the students sitting at their desks on a hot summer’s day with doors wide open.

In contrast to the success of the Centenary Courtyard, the resultant courtyard behind the extended Block C is a barren and desolate space with relentless bitumen and a long and cumbersome ramp access to the upper level. This court may conceivably be useful as a kick-around area but it seems in sore need of some TLC.

The physical relationship between the new Middle School wing and the other buildings represents the actual programmatic and organizational condition whereby the younger boys are separate but still part of the larger institution. The last of the three courtyards created in the project is the outdoor area in the north-facing crook of this wing. It is designed to provide the younger pupils with a separate home base and identity. The definition of these sunny platforms that step firmly down the hill, and the very specific relationship to the slope and the large tree nearby, are handled admirably. 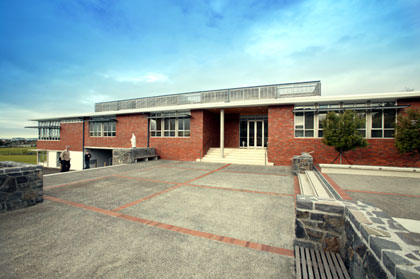 The relationship that this outdoor area has with the generous classroom walkways has many similarities with Architectus’ earlier work at St Peter’s College (see Architecture New Zealand, Nov/Dec 2001 and July/Aug 2003) however the slope here enables a more intimate dialogue and connection between the two elements, and a greater sense of security than would have been possible on a flat site. The building itself anchors this corner of the campus and unashamedly refers to the existing buildings with the employment of the same column, sunshade and brick panel details.

When compared to St Peter’s, the work at Sacred Heart College has a softer feel, more suited to its bucolic siting and the existing building stock. Ironically the red brick here is likely to cope better with the sustained abuse meted out by teenage boys than the ‘tougher’ concrete materials of the urban St Peter’s. It is also noteworthy that elements such as the stack bonded brick panels, prominent precast fins and large skylights in this project are now turning up on later schemes such as the Population Health building at Auckland University’s Tamaki campus. The original well-mannered modernism of Sacred Heart College may well turn out to be an influence on Architectus projects for some time to come.