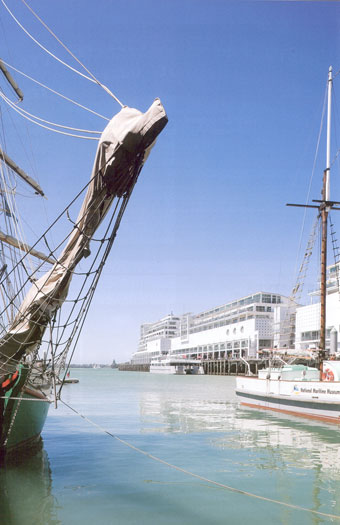 Once upon a time life was uncomplicated and Aucklanders were clear about the proper relationship between their city and its harbours: the more disconnected, the better. On the Manukau some bright spark’s solution for separating the population from their littoral fringe was to place 10 hectares of bedpan euphemistically called a settling pond at the water’s edge and regularly flush it into the harbour. In the CBD a less pongy option was chosen: the encirclement of the waterfront with a suitably authoritarian red fence, to the seaward side of which the public were made manifestly unwelcome.

Latterly, recognition of the exceptional value of the city’s watery edges has left citizens fighting the good fight to reconnect the CBD across Quay Street and onto the wharves. Since the vast majority of the world’s cities were located to afford safe ships’ anchorage along with incumbent port facilities, Auckland is not alone today in its quest to prise a port authority kicking and screaming from its prime real estate. Prior international examples may provide pointers but in my opinion it has been the development of the Viaduct Harbour area that has really opened the eyes of Aucklanders to the public space potential of their inner-city waterfront areas.

While the urban landscape around the edge of the Viaduct Harbour is not strictly speaking a building or architecture, it is the creative work of a bunch of architects striving to fulfil the public space potential of the site. Rather than being solely a ribbon of perimeter walkway the result has been a series of discrete urban (and urbane) public places, each with a certain gravitas moderated by an occasional stand of ti kouka. With the upcoming development of the Tank Farm peninsular and (eventually) the CBD wharf area there should be some debate over whether the sole reason for a sense of exclusivity in the Viaduct is the surrounding enclave of rather expensive bars, apartments and offices, or whether the physical design of public areas is capable of creating urban environments that are even more inclusive for the citizens of Auckland.